According to Chinese Legend, the Yi Jin Jing Qigong was introduced by Bodhidharma (达摩 Dá Mó c. 527 - Northern Wei Dynasty era) founder of Chan (Zen in Japanese) Buddhism in Shaolin Monastery. Bodhidharma was born in South India and travelled to China via Ocean Trade Route. The exercises were developed based on the movements these animals after spending 9 years living and mediating in caves.

Yi Jin Jin or the Easy "Changing Tendons" Exercise in its current form was described in a classical book in 1650 during the era where loyalist to the Ming dynasty was resisting the early Qing dynasty in southeastern coast.

Based on traditional Qigong, Yi Jin Jing has 12 movements within this form. It is a Yoga-like exercise which emphasise the movements of turning, bending and extending, pulling and drawing of the muscles, bones and joints, especially those of turning, bending and extending of the spine. These actions are characterised by elegant, natural and smooth movements in good taste, and couples hardness with softness. 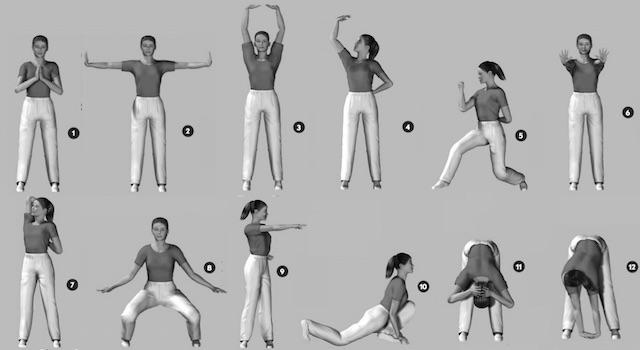 These class of physical activity, referred to by physical activity scientists as Mind Body Exercise (MBE) or meditative movement. It uses a series of easy to learn repeatable physical movements, which requires the interaction of breathing and concentration. It may take years to get the full benefit of Yi Jin Jing: